The photo within this photo was taken by Gregory Rec, Portland Press Herald, Portland, Maine.

The sun is back! We have lingered on the western-facing deck the past two afternoons to soak up some rays — really just an excuse to take the cure: Hang around doing nothing, drink a few beers and act like it wasn’t still winter in Maine. This morning the light in the stairwell was so beautiful I had to try to capture it in a photo.

The photo below was taken Friday afternoon. The Cabin Fever Snow Pile Races snow pile is still massive but pithy and not strong enough to withstand races anymore. This afternoon will likely present another fine opportunity to take off my fleece sweater, roll up my jeans and bask in the warm March sun and perhaps enjoy a brew … or two. 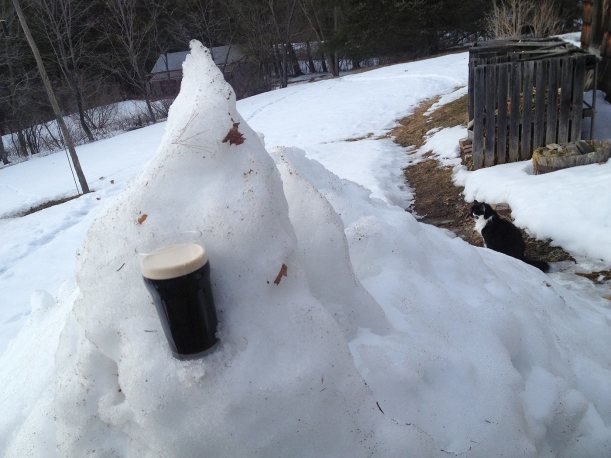 The rain and wind have made it to Maine. The haughty Snow Wizard is melted down to a stump of its former glory. When we got a couple of inches of snow Monday night, I shoveled the deck snow onto the formerly fabulous and icy Cabin Fever Snow Pile, thinking that the snow in the tracks would protect the ice in the chutes. Against all odds, I had dreams of races this weekend. Now it looks like sulking will be my major activity.

As I took a few photos a little while ago, I heard a vivid rendition of the Wicked Witch of the West’s line run through my head: “I’m melting, melting. Oh, what a world, what a world.”

It feels so much like late March here. Late March is when Maine finally gets the legendary “in like a lion” aspect of the month. But, January — out like a lion?

Snow Wizard took a hit this week, sublimating with the sub-zero temperatures, gusty winds and bright sun. This afternoon we repaired the snow pile enough to be able to hold Cabin Fever Snow Pile Races tomorrow but I’ll have to make several trips out with the spray bottle to ice it up after sundown. Am in disbelief and dismayed at our trend of less and less snowfall each year here in the northeast. We didn’t get a flake from the last storm and there’s ice/rain in the forecast for next week. Hope the weatherman’s wrong!

All rights reserved: All text and images are copyright protected. Please do not pin or otherwise share from the content of this blog without permission.

Exploratorius Redux
A.M.A.
Jenny Alexander's blog: Writing in the House of Dreams
Impressions of an Oceanspirit

this is... The Neighborhood

the Story within the Story

an ongoing experiment in the dirt, 35 plus years

Walk and Bike in France and Europe www.walk-bike-camino.com

MOSTLY MONTREAL, MOST OF THE TIME

And other metaphors for motherhood

"Art is the only way to run away without leaving home." Twyla Tharp

where observation and imagination meet nature in poetry

The works and artistic visions of Ken Knieling.